Cat Vows to Wear Chicken Hat* Until Home Is Found

Cat Vows to Wear Chicken Hat* Until Home is Found 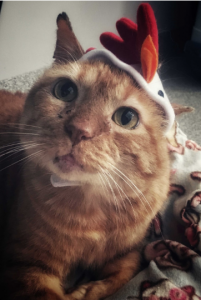 [Chicago, Il, April 2019]  Since his arrival at Tree House Humane Society in December of 2017, Leonardo Pescatore has been persistently passed over by adopters. “They go for the younger cats, the cats who smell better,” Leonardo said. “I might have The FeLV and I might have The FIV, and I even have a goopy eye, but I still have plenty to offer. I like to sit on floors, for instance, and sometimes I’ll even let you pet me and I’ll lick the air while you do it. Therefore, I shall wear this chicken upon my head (when I feel like it) until someone, somewhere, finally sees the gem that I am.”

Tree House has seen Leonardo through obesity, an itchy skin condition caused by the obesity, and the care of his Feline Leukemia Virus (FeLV) and Feline Immunodeficiency Virus (FIV). Just a few years ago, a cat like Leonardo would have been euthanized upon entry into a shelter, but Tree House Humane Society is one of the few organizations nationwide that supports and promotes the adoption of FeLV-positive cats, an illness that they feel is manageable, even if it is not presently curable. It can cause a shortened life span in the cats who have it, so Tree House wants to make sure that Leonardo is spending the rest of his years in a loving home.

“Leonardo is determined to find a home,” said Shelter Shift Leader Ricky Peacock. “He said that we’re taking too long to find him a place so he was going to take matters into his own paws. We thought maybe he would make himself more visible to adopters by purring or meowing a little louder. Instead, he managed to find a chicken hat, so we’re letting him express himself.”

Leonardo would do best in a quiet home with a quiet person who likes to pet him, but not too much. There is no current treatment required for his illnesses, but he would require regular veterinary care after adoption to maintain his current levels of health. He likes wet food and hanging out on floors. He would also really like to take the chicken hat off.

If you would like more information about or to arrange an interview with Leonardo Pescatore, please call Alana Grelyak at 773-262-4000 ext. 118 or email agrelyak@treehouseanimals.org

*for limited amounts of time and only at his own discretion

Back to the top